For the last year or so I have been developing a relationship with a Muslim co-worker. She regularly comes to my office to share her fears and frustrations. She has slowly come to trust me. Just as I know she is devout in adhering to her faith, she knows I am a faithful Christian. In some ways this has been a point of commonality between us. While our two faiths are vastly different from each other, they are both also vastly different from secular Western society and so in our own way, we are each a bit of an outcast here. I think this is part of what drew her to me; she can see that I dress and act differently than the world. What she does not yet realize, is that it is not me, but rather Christ drawing her to Him. 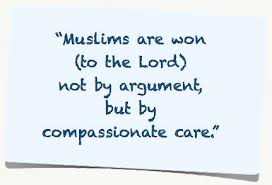 I have desired and prayed for her to get a revelation of who Jesus is. At the same time, I have been careful to allow things to progress organically in our relationship. I am aware of many of the misconceptions that Muslims have about Christians (i.e. they think we worship more than one god) and because of this, straight preaching won’t work. Certainly Bible thumping won’t work. She needs to see Christ active in my life. She needs to see the love of Jesus poured out in my life. She needs to see that a true Christian will show care and concern to a Muslim.

A few years ago when I was witnessing to Buddhist friends, God told me to worry less about what to say and concern myself more with what not to say. Bashing someone else’s religion rarely works. We don’t need to disparage what someone else believes, but instead we just need to show Jesus. Live Jesus. And when necessary, speak Jesus. Rather than cutting down what someone else believes, just share what you believe. Share who He is in word and deed to anyone who is willing to listen.

This week, an amazing thing has happened between my Muslim co-worker and I. It may be considered somewhat controversial and no doubt not everyone will agree with my actions, but I believe that God has opened a door for her to feel His presence in a way that she would not otherwise be able to.

As a devout Muslim, my c

o-worker must pray five times a day at certain times every day. Usually at least two of these times will occur during her working hours. Yesterday, she came to my office to ask me to open up the conference room for her so that she could do her prayers. When I went to unlock the conference room, I found that it was already occupied, as were some of the nearby offices. Realizing she had nowhere else to pray I offered to allow her to use my office and said that I would come back after she was done. She felt bad about making me leave my office so she said to me, “You could stay and pray with me if you want.” Perhaps she did not expect me to take her up on this highly unusual suggestion, but I have been praying for God to open a door for her to get to know Him. I saw this as God opening the door. So I said to her, “I’ll pray with you, but I’m going to pray to Jesus.” She responded by saying, “Okay, Mama (she uses mama as a term of endearment), you pray to Jesus.” So we did. Side by side, the Muslim praying to Allah and the Christian praying in the name of Jesus.

Never in my life did I expect to pray beside a Muslim like this, but God works in mysterious ways. The difference is that while she went through her rituals of different postures and preset phrases, I was praying for her salvation. I was praying for God to intercede in her life. I was praying for Jesus to reveal Himself to her.

Afterwards she told me that what had happened she could never tell her family, but that it was very special. Muslims will often pray by themselves, but consider it to be an added blessing to pray with other Muslims. Most would consider it a serious affront to Allah to allow a Christian to call on the name of Jesus in front of them during their sacred prayer times. What happened here was huge. Bigger than mere words can explain.

Again today we had the opportunity to pray together. Afterward she reiterated that her family could never know about this, and hinted to me not to let any of our co-workers know. Then with a smile she said she would see me again tomorrow before slipping out my office door. It is clear that while this may be slightly outside the comfort zone for me, it is downright radical for her. And yet, when I offered to leave her alone to pray, she again invited me to stay. God is doing something here.

When I say we prayed together, I use the word “together” very loosely. It is more like we are praying at the same time, rather than praying together. But it is my prayer that she will feel the difference. I’m praying she will feel a move of the spirit when we pray together that she has never felt when she prayed on her own. So while we may not exactly be praying together, I believe she can be influenced by the Christ-centered prayers going on right next to her.

I suppose it is somewhat like two people going to the same restaurant. They may arrive at the same time, but that doesn’t necessarily mean they’ll be eating together. No, they are seated at different tables and they order different items off the menu. But if they are seated close enough together, perhaps one of the diners will catch the aroma of the other diner’s food. Perhaps, their mouth will start watering and they will find they have a hunger for the other diner’s meal, even while their own food sits in front of them. Perhaps, one day, they will venture out and order that inviting dish and find it so satisfying that they never go back to their old meal.

I pray that you would get a hold of this woman’s heart. I pray that this door you have opened will allow her to develop a hunger to truly know You. Lord, I ask you to protect me and my co-worker from any traps the enemy may try to set for us through these interactions. May You always be the reason, hope, and purpose of all our endeavors. Thank you for your love and care for the lost and misguided sheep in this world. Teach us to be laborers to reach out to a lost and dying world. I love you.

34 thoughts on “Praying with a Muslim”