So I have had the same prophecy spoken over me throughout the years.  I can think of three main instances in which it has happened, two of them were with the exact same wording by different people, in different states, and almost a decade apart.  The third was definitely in the same spirit of the other two. 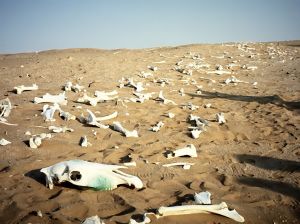 When I was younger, every time I had a serious time of asking God for revelation/my future, I repeatedly would open my Bible and it would land on Ezekiel 37 (this is over years starting in either elementary or middle school at least 5 or 6 times or even more).  Finally, during my college years after one such time like that, I angrily drove home from church one night and was like “God! You have to tell me what it means, why the valley of the dry bones??? You have to or… or… I don’t even know what!”  It is amazing to think I felt I had a right to yell at God like that. Yet instead of punishing me, that very next Sunday we had an unexpected guest preacher who taught on promises.  At one point, he talked about Ezekiel 37 and explained that bones represent promises and that the valley of the dry bones is an analogy of how God can and will breathe life back into promises that seem so dead and dried up.

Last night, the pastor preached on the subject of promises and how God is faithful and able to perform that which He has spoken.  During alter call, I felt the renewed hope in my promises.  They may at times seem SO dead and so far off, but I once again said to Him who is able, “Jesus, if this is truly what You want for my life, You KNOW what needs to come to pass.  I believe. I will go where You want and do what You want.”  I felt His promises begin to take life back on those dry and dusty bones.  I felt Him say:

“That is why I sent you that passage so many times when you were younger, so that you would know that from a young age I wanted you to learn that I am able to bring your promises back to life.  I want you to always know that I am able and I will bring My promises to life.”

What promises has God laid on your heart that you feel are dead and dusty?  Know that He is able! Let today’s prayer in your heart be to reclaim your promises! Don’t let despair take hold, know that He is faithful and able to perform what He said He would!  Your promises may look dead in your mind’s eye, but He is able to bring back life even the things that seem to have been lost to you years ago.  Let today’s prayer be one that claims His faithfulness.  Ezekiel was told to prophecy to the bones so speak it forth- speak faith that God WILL bring His promises for your life to reality! You may not see the results today, or even tomorrow, but hold on to your promises, hold on to your faith, and know that HE WILL BE FAITHFUL!

God bless you readers as you believe in His promises for your life once again,