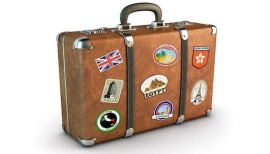 I leave tomorrow for Asia. It’s hard to believe almost a year has gone by since I applied for this program. I’m still deciding on last minute things to pack. I should be done, but I keep changing my mind about things. I underestimated the amount of space all the gifts for my host families would take up in the suitcase.

Peoples’ reactions to this trip are interesting. Most assume it’s just a work trip, others assume it’s through my church somehow. Some have told me they can’t picture me traveling so far alone because I’m too timid and quiet. Others have told me they’re surprised I’ve never been. It’s amusing to see how people project things onto you.  People travel everyday, I don’t quite see what all the fuss is about. When I’ve told people I’m going to the Philippines, China, and Taiwan (in that order) for some reason most folks only seem to register China. I’ve been asked over and over again about my trip to China as if that’s the only place that matters. This bothers me. I get it; China’s huge. It’s also the economic powerhouse that people in the US have their eyes on these days. Out of the three, it is the one that Americans tend to know the most about. But still, it is not the only place I’m going to, stop acting as if it is. My other pet peeve? Taiwan is not Thailand! And it’s also not China. People, please go read a book. Oh, okay enough ranting. Moving on.

Things I’m looking forward to on this trip:

It’s sort of silly the things I’m worrying about. I should be concerned with safety, translation issues, getting along with my host families, the lessons I’m going to attempt to teach etc. Instead I’m thinking about being fat and coming home to a backlog of work.

Seriously though, I’m trying to gear myself up for the inevitable comments about my weight that I’m sure I’ll hear. It’s just not unusual for Asians to make comments about weight in a way that as Americans, we aren’t used to. It was that way when I first met my ex’s friends.  It was also that way when I was going to Chinese church. In addition, people assume you can’t understand what they are saying so that gives them even more liberty to make comments. There was one woman at Chinese church who made constant comments about my weight. Her and her daughter had numerous full on conversations about it while I was right in front of them. It was partially my fault because I never let on that I had a clue what they were talking about. That was somewhat unfair of me. Later when she found out that I understand a little Mandarin she was a bit upset that she hadn’t been told. But pretending not to understand was my only defense. What would I have said? So I said nothing.

Granted, I’ve lost quite a lot of weight since then, but compared to your average Asian, I’m still huge. Here in America, I’m thrilled to be overweight. You may wonder how anyone could be thrilled to be overweight. Well, when you’ve spent all of your adult life in the obese category, and most of it in the ‘super (morbidly) obese’ category, being merely overweight is a wonderful feeling! but that’s in America. Going to Asia basically means I’m going back to being super obese (in comparison) and I’m not looking forward to that part of it.

I know I’ll hear the comments and it will be the same as it was with my ex’s friends or with the folks at Chinese church; I’ll grin and bear it and act as if I don’t know what they’re saying. It will be partially true since my understanding of Mandarin is so limited. I’ll try to tell myself that I misunderstood, that they aren’t saying what I think they’re saying, that it’s just their culture, that it doesn’t matter…that it doesn’t affect me.

Ahh, but enough of that. I’m not going to waste too much energy thinking about those things. Good things are ahead! I’m going with a spirit of expectation and I can’t wait to see what the Lord is going to do! My prayer is that by the end of this journey I will have a new appreciation for my home country and all the things we so often take for granted. More importantly, I pray that somehow the people we meet will be forever changed because of God’s mercy and love for them.

Since Being Rebekah is a shared blog with a pretty specific focus, I have set up a second, semi-private blog to document my experiences on this trip. I will attempt to write every day and later upload the posts whenever I can find an internet connection. It will not necessarily have a spiritual focus the way this blog does, but will function more as a personal journal for me. Never the less, if you are interested in keeping up with my journey, send me an email at beingrebekahl@gmail.com and I will send you the link.

Next week on my regular day to post on this blog I’ll be in China. I am going to try to post from there, but I’m not really sure if I’ll be able to or not. WordPress is banned in China, but a fellow blogger that lives there has sent me instructions on how to get around that, so we’ll see. Also, my internet availability will be a bit spotty while I’m gone. I’ll have it in some places and not in others so I’m not completely sure if I’ll be able to post on my regularly scheduled day or not. To be sure, I’ll post again when I can. Say a prayer for me.