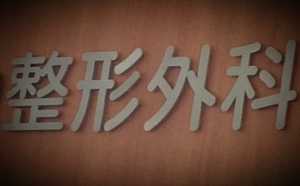 I am currently on a company trip to Hong Kong, Beijing, and Taipei. This post is just an observation about the beauty standards that are prevalent here. It’s not really a spiritual post, it’s just some things that have been going through my mind since I arrived. I think it dovetails nicely with Rebekah M.’s last post, The Monster in the Mirror. Please don’t take this post as criticizing the culture. I am well aware that my own culture is just as flawed and has just as many ridiculous standards. These are just my thoughts and observations.

There is an impossible standard of beauty here. This is true the world over, but it seems especially prevalent here. It amazes me that I can take a walk and get handed packs of tissues from at least three different plastic surgery outfits on a single street.

Plastic surgery is increasingly common in the west, but it’s still pretty much relegated to celebrities and the super rich. Here, it’s not uncommon for your average woman to seek it out. There’s nose jobs to be had, chin chiseling (to get that impossible heart-shaped face), double eye-lid surgery, liposuction, and the surgery to help you get rid of your radish legs. In other words, surgery to change you from something perfectly normal to something supposedly more attractive. There’s even a strangely popular procedure to turn your areolas into hearts. Really? Who would want or need such a thing? Especially something that so obviously can only be accomplished through surgery?

Honestly, I think those women with the extreme heart faces look weird. It’s unnatural. I think the surgery to get a double eye-lid is a disheartening attempt to appear more “western”. Maybe I’m wrong about that, but that’s sure what it seems like. And radish legs? Seriously? I always thought your thighs were supposed to be wider than your calves. This is considered something so ugly that it bears it’s own insult?

I guess it can be compared to the teenage obsession in the US to have a thigh gap. A few months ago I saw a picture one of our youth at church posted on her instagram account. She had photoshopped the picture in order to give the appearance that she had a thigh gap. It was a rather poor photoshop job so that’s how I knew and it made me so sad because she is a beautiful girl. An absolutely gorgeous girl actually. But there’s that impossible standard of beauty everywhere. Pretty girls are not exempt.

So I know it isn’t unique to this area, but perhaps because I’m in a foreign place it’s even more obvious to me. After all, we tend to do a lot more observing when we’re in an unfamiliar environment. Here most girls don’t flaunt their bosoms the way they do back home. You won’t often see low-cut tops, but you know what you do see? Super short skirts and shorts. Legs seem to be the body part of choice to show off. Therefore, they need to be perfect.

Then there’s the whitening creams, celulite reducers, fake eyelashes, and round contacts. The obsession to look…different…better…younger is everywhere. This goes far beyond the typical fat shaming which is done en masse, but also focuses heavily on things that are completely beyond personal control.

For example, being short is an insult. Being someone of short stature myself, I find it interesting. On the one hand, I love coming here and not always being the shortest one in any given gathering. Back home everyone is taller than me. Here, most people are still taller than me, but the difference in height is much less pronounced. I might be the shortest in a group, but it will only be by a few inches rather than by a foot or more. It’s an amazing feeling to be with a group of people and actually be able to talk to them face to face. I have spent my life literally looking up to people. Taller people are often unaware of how uncomfortable it is when they stand too close. The closer they stand, the sharper the angle my neck has to be at in order to look at them (keep this in mind when talking to small children). I sometimes wonder if this is the cause of my chronic neck pain, but that’s another story.

Anyway, this amazing feeling of not being quite so short here is dampened by the fact that here being short is an insult. I can’t tell you how many times I’ve heard someone describe another person as “plain and short” as a way to say they aren’t worth anything. They don’t deserve a boyfriend etc. because they are so “ugly – plain and short”. It’s strange to me. Back home being short is just a description, it’s not an insult. Your friends might kid you about it, but you’ll never hear someone call a person short in the same way you hear people call someone fat; like it’s a horrible thing to be – but here you do. It’s strange to me. At least when you insult someone for being fat (which I’m not a fan of either) the person likely has some control over whether they’re fat. When you insult someone for being short, you’re insulting something that they have almost no control over. It’s determined almost entirely by genes. Good nutrition in early childhood can make a difference, but that isn’t something most kids can control.

I say all that to point out how ridiculous the standards of beauty are. There’s actually a ton more examples of this that I could share, but the point is that many of them are literally unattainable (or only possible with surgical intervention). People grow up hating themselves. Hating the bodies that God gave them. If only they knew that they are fearfully and wonderfully made (Psalm 139:14).

In His Love,
Rebekah L.